Aurora is a layer 2Layer 2s are frameworks or protocols built on top of an exis… environment that runs on NEAR Protocol. Because it leverages the Ethereum Virtual Machine (EVM)The Ethereum Virtual Machine (EVM) is a development interfac…, the user experience is instantly familiar to users of EthereumEthereum launched in 2015 as a decentralized, blockchain-bas…, Fantom, and Avalanche. It is high throughput, scalable, and has low transaction fees for users, making it a fertile environment for DeFi to prosper. I have recently been exploring the Aurora ecosystem so that I could test out the network and start using the new dApps. In this article, I will introduce Aurora and share my experiences in adding the network, spending gasGas is the fee paid to use the platform\’s computational pow…, bridging assets, and trading.

What is the purpose of Aurora?

To understand Aurora, you need to have some background on NEAR Protocol. NEAR is a proof-of-stake, layer one blockchainBlockchains are made up of a series of individual blocks. Ea… that is designed for usability. The network has enabled sharding which allows parallel processing of transactions on the blockchain – at this stage, around 4,000 transactions per second. This means fast and affordable transactions for users of the network. Gas on the network is paid for using NEAR, with 70% of all gas being burned and 30% being transferred to the smart contract creators. This is a huge incentive for developers to start building on NEAR. You would think that developers would be flocking to begin building on NEAR, but there is a hitch; smart contracts must be written using the Rust programming language. Currently, most developers create smart contracts using Solidity, which is used across EVM-compatible chains such as Ethereum, Fantom & Avalanche. To solve this issue, the team at NEAR protocol has launched Aurora to bring EVM compatibility onto their blockchain. Aurora has high throughput and scalability and low transaction costs and offers several ways to bridge assets onto the chain.

To sum it up, Aurora makes it super simple for developers to launch their dApps on NEAR Protocol without rewriting code. By combining this technology with generous developer grants, the project is positioning itself as a central hub for DeFi and NFTs. That means you can expect high-quality apps you are familiar with to be ported on to the chain.

What can you do on Aurora?

Because Aurora is an EVM-compatible chain, there is an ecosystem of projects growing that is similar to what you would find on Ethereum, Fantom, or Avalanche. This is because developers can quickly go ‘cross-chain,’ porting over their existing projects into the Aurora space. There is already a fast-growing collection of projects such as DeFi exchanges, lending protocols, gaming apps, and NFTs. An excellent resource for discovering Aurora apps can be found at Awesome Near.

Before you begin: Configuring MetaMask

It often pays to be an early adopter of an up-and-coming chain. You can gain valuable alpha from testing the latest projects, participating in the community, and hanging out on DiscordDiscord is an instant messaging (IM), voice over internet pr…. If you want to hop into Aurora to begin exploring the ecosystem, the first step will be configuring your wallet. MetaMaskMetaMask is a popular web3 browser plugin and mobile applica… is the de-facto wallet for the Aurora network. I will quickly walk you through three steps to get you connected.

Step one: Set up a MetaMask Wallet

Step one will be to download Metamask and create an account. If you haven’t done so, follow our How To guide on Setting Up Metamask for Web 3.

Open your MetaMask wallet, click on the network selection drop-down menu at the top, and choose Add Network. 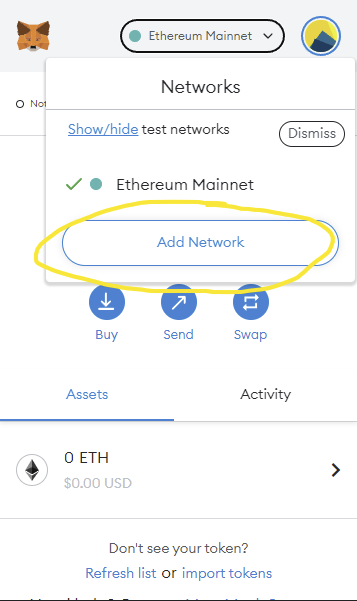 Fill in the following information: 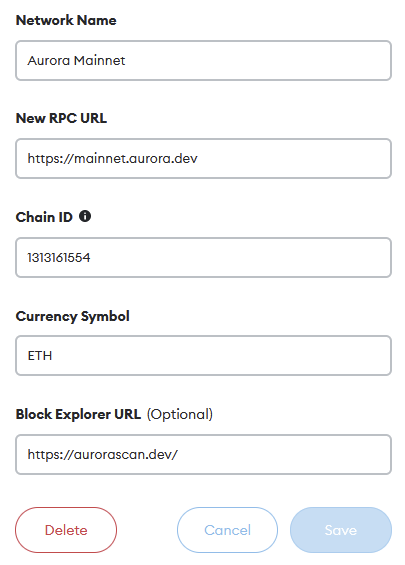 For more information, you can check out the Aurora documentation.

Finally, select the network selection dropdown and choose Aurora Mainnet. You are now ready to begin using the Aurora network.

It might surprise you that the AURORA token is not used for gas on the network. Instead, you will need ETH to execute transactions. If you don’t have any ETH, you will be stuck and unable to do anything with your assets. If you are lucky, you can use an ETH faucet where you can request a small amount of ETH to help you out.

If you want to explore Aurora, you will need a way to get your assets onto the chain. In my experience, bridging to Aurora was relatively painless. To assist you, I will share my experience of bridging assets over. My goal was to explore a few different methods of getting onto the chain and to ensure that I had gas (ETH) to make transactions on the Aurora network. I used the native Rainbow Bridge to take assets from NEAR to Aurora to do this. As a regular Fantom user, I also wanted to explore a method of bridging from Fantom to Aurora. For that task, I tested out the Synapse bridge. Follow along to see how I went and learn how to bridge assets into Aurora.

Bridging from NEAR to Aurora

I wanted to try the Rainbow Bridge to test out bridging from NEAR to Aurora. My end goal was to have some ETH in my AURORA wallet to use as gas for transactions. To begin, I purchased some NEAR on Binance, which I withdrew to my NEAR wallet. If you haven’t set up a NEAR wallet, you can read more about it in this article. This process took less than 5 minutes for me.

Now I had some NEAR in my wallet; the next step was to trade some of it into ETH. I planned to trade on a decentralized exchangeA cryptocurrency exchange is a type of digital currency exch…. To use NEAR in smart contracts, you must first wrap it into an ERC-20 token wNEAR. By wrappingA wrapped token is a cryptographic asset that is pegged to t… the NEAR, you can trade, lend, and more. You can do this easily in the NEAR Wallet by clicking on ‘Swap’ under your balance. You can swap NEAR for wNEAR at a 1:1 ratio at all times.

My next step was to trade some wNEAR for ETH. I hopped onto Ref Finance which is an AMM decentralized exchangeA cryptocurrency exchange is a type of digital currency exch… on the NEAR network. You could think of Ref Finance as being similar to SpookySwap on Fantom or UniSwap on EthereumEthereum launched in 2015 as a decentralized, blockchain-bas…. There are loads of assets that you can choose from on this platform and the swap fees are low. I connected my NEAR wallet to the protocol and swapped some NEAR for ETH. This process took less than a minute to complete.

The Rainbow Bridge is a trustless, permissionless protocol that was built by the NEAR Protocol team. Users can bridge assets to Aurora from either NEAR or EthereumEthereum launched in 2015 as a decentralized, blockchain-bas…. Transactions confirm in 1-2 seconds and have a typical cost of $0.01 when bridging from NEAR.

The next step for me was to use the Rainbow Bridge to bridge my ETH. It is simple to connect your NEAR wallet by clicking the connect button. It is similar for the Aurora wallet too, after you click connect you will be prompted to connect the wallet in MetaMaskMetaMask is a popular web3 browser plugin and mobile applica….

After connecting the wallets, you can choose which assetAn asset is anything of monetary value that can be owned or … to bridge and the amount to transfer. I chose ETH at this stage, entered in the amount and clicked confirm. The asset was transferred almost instantly into the Aurora wallet. In my experience, the Rainbow bridge was super fast and easy to use. If you are looking to bridge from NEAR or EthereumEthereum launched in 2015 as a decentralized, blockchain-bas…, definitely check it out.

Bridging from Fantom to Aurora

If you are currently using Fantom and you would like to bridge assets over to Aurora, there is a way. The Synapse Protocol bridge is a fast and affordable way to make the switch. At the moment you are limited to bridging USDC, USDT and wETH. To begin navigate to the website and connect your wallet. Then simply choose the assetAn asset is anything of monetary value that can be owned or … you would like to bridge and select the Aurora network.

You will be presented with a summary that shows the transaction fee and the estimated amount that you will receive after bridging. Simply select bridge token and approve the transactions in your web 3 wallet. That’s it! In my experience, I had the bridged assets in my Aurora wallet in less than 10 minutes.

That wraps up my onboarding journey for Aurora. If you have been following along with me, you would have now finished bridging ETH into your Aurora wallet and you will be ready to begin exploring the ecosystem of projects. So far in my testing, the network is snappy and affordable, reminding me of the experience on the Fantom network. Now is a great time to check out new networks and get a feel for what they offer. Going forward, we will have additional content on Aurora including deep dives into the top projects on the network. Keep an eye out for that coming soon.

Join the conversation on Discord!