Made popular by Curve on EthereumEthereum launched in 2015 as a decentralized, blockchain-bas..., “Wars”, refers to the competition for liquidity on a specific protocol (e.g, Spirit Swap – Spirit Wars). These “Wars” affect the flow of money in DeFi in profound ways and could make or break both protocols and farmers. Let’s get up to speed on the Fantom Governance Wars and see how we can take full advantage as farmers.

The usual participants of any governance war include:

Governance Wars occur on protocols with high liquidity and gauge controlled emissions that are managed by governance votes. Commonly, such protocols are either:

Governance Wars begin when protocols like these allow their token holders to vote on how their emissions are allocated to their pools. Other protocols want control of these allocations so they have them directed to their own tokens and thus drive up the value of their pool.Currently, the following protocols are engaged in the Fantom Governance Wars:

When users stakeParticipation in a proof-of-stake (PoS) system to put your t... with these protocols they receive their governance token as rewards $SPIRIT, $BEETS, and $HND, respectively.To discourage users from dumping and also add utility to their tokens protocols incentivize users to lock their tokens. Locking tokens earns users  veTokens which grant users the following:

The usual strategy is to acquire massive amounts of governance tokens in order to compete in the wars and drive liquidity to their liquidity pools.

Alternatively, some protocols find it more budget-friendly to bribe users who already have voting power instead. Bribes are advantageous for users as well since they offer additional passive income on a bi-weekly basis.

So far, we’ve got three major groups involved in the war. We have the protocol running the governance vote, the protocols seeking to capture allocations by winning votes and the voters themselves.

Yield aggregators also use their positions to create wrapped versions of governance tokens that are pegged 1:1. Wrapped tokens allow users to stake their tokens and receive rewards that they would’ve received if they locked their tokens. Unlike locked tokens, wrapped governance tokens are liquid; meaning you can un-stake and swap them for other tokens at any time.  Some examples include:

Wrapped tokens allow yield aggregators to continue their quest of acquiring massive amounts of governance power. There are a couple of aggregators that have innovated the wrapped token experience.

Liquid Driver’s wrapped version of inspirit, linSPIRIT, can be staked on Liquid Driver. Staking in Liquid Driver’s autocompounder produces a receipt token, slinSPIRIT. slinSPIRIT can be used as collateralCollateral refers to an asset that a user posts or locks up ... for borrowing the stablecoin Mai or FTM on @Marketxyz.

rainSPIRIT is Ola Finance’s wrapped version of inSPIRIT. rainSPIRIT  is unique because it can be staked in Ola’s bribe farms allowing the wrapped tokens to earn additional yields from bribes.

Developed by beluga finance, beBEETS allows users to unlock the full potential of their fBEETS. Users who stake their fBEETS on beluga receive boosted rewards and the ability to direct BELUGA emissions on Beethoven-X. This allows users to participate in two different governance votes using the same token. Capital efficiency and democratic efficiency!

Though there are many yield aggregators with impressive strategies, Liquid Driver has managed to produce strategies that have cemented its position as a kingmaker in the Fantom ecosystem.

As Fantom’s native liquidity mining dApp, Liquid Driver holds a majority share of governance power in Spirit Swap, Hundred Finance, and several other protocols. They are also the only protocol on Fantom to keep their wrapped tokens at the peg.

Liquid Driver can be viewed as a sort-of Fantom Index Fund. Liquid Driver’s token $LQDR can be locked for $xLQDR which rewards users tokens from various other blue-chip protocols, granting optimal exposure. If you’re looking for more liquid options they offer cLQDR and fNFTs.

Another innovation from Liquid Drive is Shadow Farms. When Shadow Farms is released  users will be able to single stake $BOO, $SPIRIT, or $BEETS and receive the yield-bearing version of the staked token as a reward  (xBOO, linSPIRIT, fBEETS).

If you’d like to read more about Liquid Driver check this thread out 👇:

Ensure you take your time to do research on each of these projects and their unique risks and how they fit into your own personal strategy as they are beyond the scope of this article. Here are 2 strategies for Farmers looking to benefit from the ongoing Defi Wars:

Staking LQDR for xLQDR allows you to earn rewards in $BEETS, $linSPIRIT, $BOO, $LQDR, $SPELL, and $DEUS. Users can swap their rewards or they can create positions to participate in the #Beetswars and/or #Spiritwars. Here’s what you should do with your xLQDR rewards if you want to participate:

If you’re locking xLQDR for more than a year you should purchase an fNFT instead to increase your ability to liquidate your position in the future. 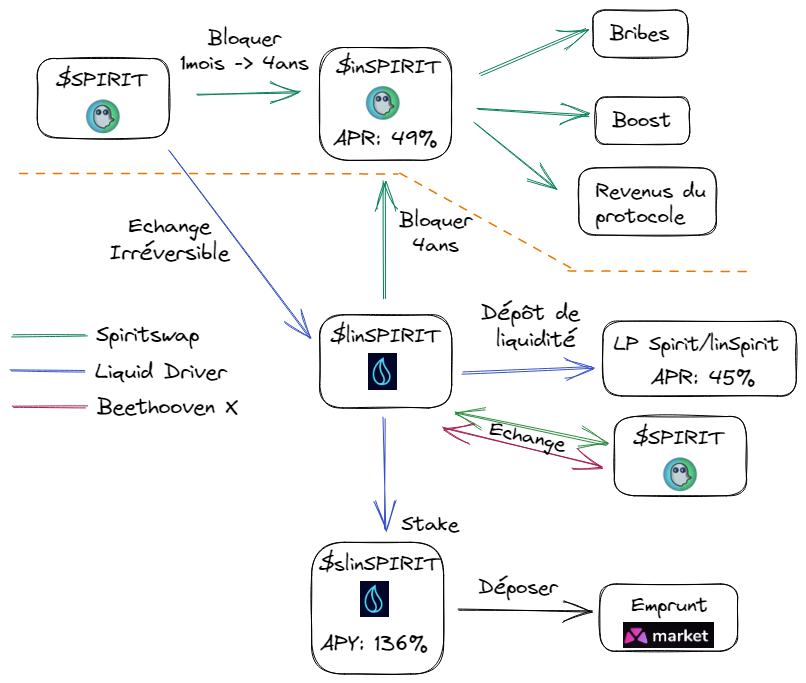 The second strategy consists of simply buying cLQDR and holding it. cLQDR is the auto-compounding version of xLQDR. Over time it will grow, allowing users to put their investment on auto-pilot.

As you can see, the Fantom Governance Wars have managed to improve the cohesion of the ecosystem while increasing yields for users.

All the while, Liquid Driver has secured its spot as the kingmaker of Fantom.

Here are some resources to stay up-to-date with the ongoing Fantom governance wars: